In the CARICOM region, where both people and ecosystem face heightened threats from climate change, standardizers are united in support of the London Declaration. 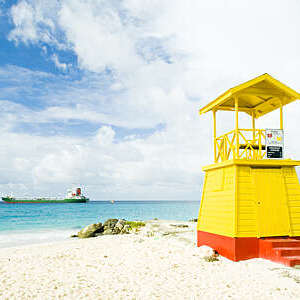 By Barnaby Lewis
Tagged as

Ongoing climate change will have severe impacts for all of us. But for some island states, it could spell the end.

The threat of rising sea levels is a serious concern for low-lying countries and islands around the world. Disappearing beneath the water is the most catastrophic scenario, but there will be numerous, less immediately visible ways in which climate change will bring misery to people who are already suffering from the effects of a global addiction to fossil fuels.

Disrupted weather patterns will likely impact zones like the Caribbean which have, over a period of millions of years, thrived under a delicate balance between ocean currents and trade winds, and the predictability of regular wet and dry seasons. When compounded with the catastrophic effects of warming on marine life, and reefs in particular, it’s easy to understand why climate action is an urgent priority.

Many livelihoods depend on tourism which, as elsewhere, has taken a severe hit since the onset of COVID. There are plans for recovery but, in the long term, both governments and islanders themselves know that the priority must be a focus on sustainable development, resulting in a net-zero economy.

Across the Caribbean, national standards bodies are represented by the regional body CROSQ (the CARICOM Regional Organisation for Standards & Quality). CEO Deryck Omar is a lifelong standardizer and committed advocate for climate action who, in common with many global experts, believes that it is essential to maintain commitments to limit temperature rise to a 1.5 °C maximum. A virtual event earlier this year exploring sustainable energy showed how CROSQ is assisting in the fight against climate change and in the uptake of sustainable energy. Now their members have gone one step further.

These are complex issues requiring shared solutions and measurable results. The situation demands urgent action and International Standards are needed to make that a reality. That’s why CROSQ members fully support the London Declaration.

CROSQ members have committed to the London Declaration, an historic announcement made at the 2021 ISO General Assembly. Supporters of the Declaration are united in their resolve to use International Standards and the ISO system to solve our most pressing challenge – Climate.

Find out more about how the London Declaration puts ISO standards on the frontline of the battle to protect our planet.

CROSQ is the regional inter-governmental organization that develops regional standards, promotes the harmonization of metrology systems and supports the sustainable production and trade of goods and services in the CARICOM Single Market and Economy (CSME).

Headquartered in Barbados, CROSQ is the regional centre for promoting efficiency and competitive production in goods and services through the process of standardization and the verification of quality.

Want to get the inside scoop on standards, or find out more about what we do? Get in touch with our team or check out our media kit.

Keep up to date with ISO

Sign up to our newsletter for the latest news, views and product information.